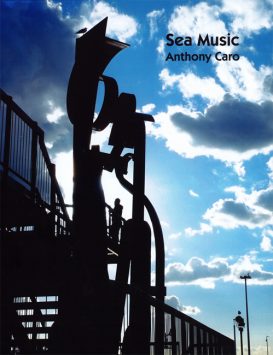 In 1991, when Anthony Caro’s (1924–2013), Sea Music was officially launched by Lord Palumbo, completion of Antony Gormley’s, Angel of the North was seven years away. Sea Music may be seen as a forerunner of this and other iconic public sculptural projects.

However, only thanks to the extraordinary generosity and determination of a group of committed individuals and organisations did this major site-specific work by one of the greatest sculptors of the late twentieth century find its way onto the quayside in the town of Poole on the South coast of England.

The fascinating story of how this happened is told here in Alastair Sooke’s illuminating essay, and recalled by Caro himself in a previously unpublished note written in 1991.

The reason for publishing this book now is that, after over 25 years of standing up to Poole’s harsh maritime climate, Sea Music has been conserved and repainted and is being justly celebrated through a programme of art and heritage activities.

This catalogue celebrates the restoration of Caro’s, Sea Music sculpture in Poole (revealed in spring 2017), and is also published to coincide with an exhibition of the artist’s, Concerto Series at Poole Museum (13 May – 15 October 2017).

£15.99
Buy now
(Your order will be fulfilled by Ingram Publisher Services)