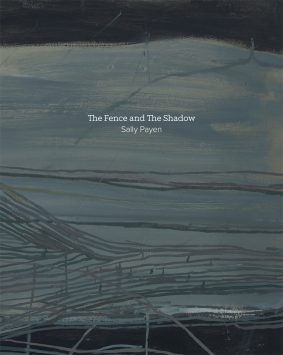 In The Fence and The Shadow Sally Payen takes us on a reflective journey of past experience, based on her exploration and research about the contested landscape of former RAF airbase Greenham Common (Newbury, Berkshire) and the women’s peace camps and anti-nuclear protests that took place there in the 1980s.

Payen is always experimenting with the process of painting and her imagery draws us into this real yet imaginary world of security fences and knitted symbols.

Evocative and arresting, the paintings disclose the sense of disquiet, insecurity and sacrifice experienced by the women, through the repetition of mark making and the colour palette the artist has carefully chosen. Viewed as part landscape, part portraiture they reveal the powerful unity between the protestors and the physical environment.

The Women’s Peace Camp was originally established at RAF Greenham Common, to protest against the nuclear weapons that were being housed there. Although the missiles were removed in the early 1990s, protests continued at the site for years. Today, this place contains many traces and memorials of the protest and camps that happened there and is still an emotive symbol of Women’s Activism.

Published after the exhibition at MAC Birmingham (23 September – 26 November 2017).