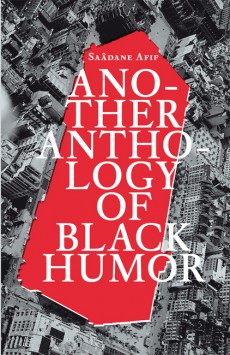 The French artist Saâdane Afif – recipient of the acclaimed Marcel Duchamp Prize in 2009 – had his first solo exhibition in 2012 in the German museum, MMK  Frankfurt. The exhibition title was derived from André Breton’s Surrealist work Anthologie de l’humour noir of 1940.

In the exhibition, Afif  retraced African influences on the European avant-garde while also linking it to modern French art and literature. With a coffin model manufactured in Ghana, he responded to a custom which has recently taken hold in that West African country whereby figurally designed coffins serve as a form of commemoration of the deceased. By virtue of its shape, the coffin entitled L’Humour Noir at the centre of the MMK will make reference to the Centre Pompidou.

In keeping with his usual approach, Saâdane Afif has called upon well-known protagonists of the art world to write texts about the coffin, taking his own thoughts about it as their point of departure. The texts are part of the accompanying catalogue and form the contextual key to understanding the work.