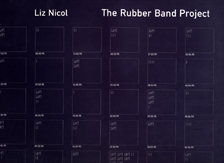 The Rubber Band Project is very much a project between mother and son. It consisted of finding and collecting discarded rubber bands on the way to and from school. As Liz Nicol says: “The routine journey to school was marked by the number of rubber bands we found, and I associate some of the resulting prints with memories and feelings of special times spent together when my son was growing up quickly.”

Noticing how the winter sun and wind dried the pavements exposing impressions of leaves, Nicol began to organise a visual story about her and Charlie’s discoveries. Over a one year period they collected 1,272 rubber bands. Thinking about how to present this process of discovery sent Nicol back to the earliest forms of photography. She became interested in drawing with light or, as Fox Talbot wrote in his description of ‘photogenic drawing’, the process by which “natural objects may be made to delineate themselves without the aid of the artist’s pencil.” It was through this research that she found the process that mirrored her contemporary collecting, the cyanotype, used to great effect in the 19th century by the botanist Anna Atkins. To these techniques and disciplines Nicol brought her own aesthetic sensibility.

Liz Nicol is an artist and lecturer; her work has been included in numerous group exhibitions and has been the subject of several one-person shows.

£7.95
Buy now
(Your order will be fulfilled by Ingram Publisher Services)