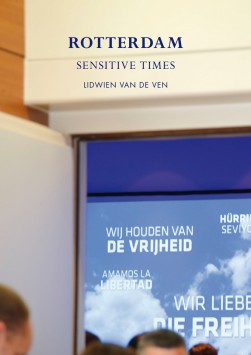 Van de Ven chose to reverse the city-specific mandate of the project and portrays Rotterdam as a microcosm of global developments at the intersection of politics and religion.

Beginning with the highly polarizing murders of one-time Rotterdam-native Pim Fortuyn and the subsequent murder of Theo van Gogh – events which have led to the rise of an internationally-networked right-wing movement whose polarising effects on Rotterdam and the Netherlands reverberate internationally in the aftermath of 9/11 – she travelled to places as far away as Antwerp, Berlin, New York and Oslo to trace the resonances of the ensuing social struggle and political opportunism.

The resulting photographs cast a meditative view onto a world where sensitivity to what is visible and what is invisible is continually mediated by political forces.