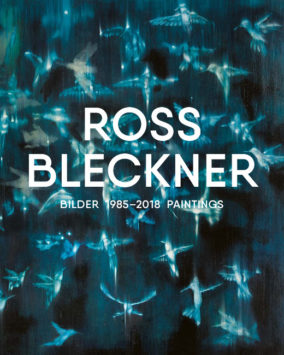 From one series of pictures to another, the American painter Ross Bleckner (b. 1949, New York) reinvents himself in order to ultimately examine again and again the fragility of existence and man’s yearning for the metaphysical vanishing point behind the world of appearances.

Death is omnipresent in Bleckner’s oeuvre and marries with beauty within his paintings. Images of magnificent flowers or human cells, which the artist transforms into bright lanterns, explore an unknown territory between biology, psychology and identity.

When, almost imperceptibly, letters appear between the stripes of a painting from 1987, spelling out the words ‘Remember Them’, then this epitaph is also a reference to that unfathomable disease that remains a consistent focus for Ross Bleckner: AIDS.

The exhibition at the Neues Museum Nürnberg covers a period from the mid-1980s to the present day.

Published on the occasion of the exhibition ‘Ross Bleckner: Overhead and Below’ at Neues Museum Nürnberg (22 November 2019 – 8 March 2020).