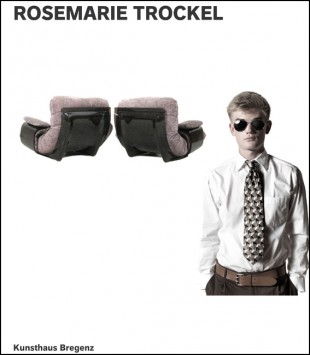 In a career spanning more than 30 years, encompassing such internationally renowned exhibition events as documenta (1997 and 2012) as well as the German Pavilion at the Venice Biennale (1999), and which has led the way to the world’s major museums, the artist has succeeded in creating new work complexes, objects and images that are continually surprising.

There had already been a great furor in the 1980s surrounding the reception of her wool works, machine knitted woolen fabrics attached to stretchers and then displayed as pictures. In a second group of works she assembled ordinary hotplates on shiny, white, enameled metal panels.

Objects with gender specific connotations were again re-contextualized, as had already occurred in the knitted pictures. These abstract works mainly originate from the 1990s and were the ones that secured Trockel’s place in the history of 20th century art.

This catalogue contains contributions by Johanna Burton, Yilmaz Dziewior, and Beate Söntgen that shed light on Trockel’s art historical significance as well as her position in contemporary art. In his contribution, the American artist and author Sam Pulitzer takes an unconventional look at the work of Rosemarie Trockel.

Published for the exhibition at Kunsthaus Bregenz, 24 January – 6 April 2015.