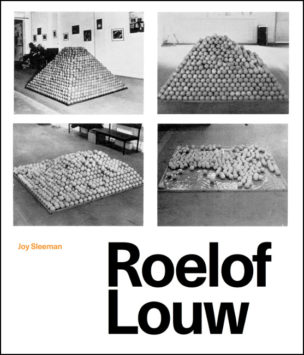 His work addresses itself to our bodies and minds, implicating them in its realisation and its sites: which might be streets, parks, woods or galleries. In, Soul City (Pyramid of Oranges) 1967, the work for which he is best known, the taking of an orange to a hand and the experience of eating the fruit are crucial aspects of the work, as is the action of destroying the piece in the process.

Prescient in anticipating the participatory and interactive art of the present, Louw’s work remained resolutely denied as sculpture, at the artist’s insistence. This was so even as sculpture became conceptual, ‘dematerialised’, or located in ‘the expanded field’, and even while his work was itself a part of these schisms.

Born in South Africa, Louw moved to London in 1961. Working in London, New York and Cape Town, he participated in some of the most important episodes in twentieth century sculpture, and exhibited in landmark exhibitions such as When Attitudes Become Form at Kunsthalle Bern (1969), curated by Harald Szeemann, and 955,000 at Vancouver Art Gallery (1970), curated by Lucy Lippard.

As well as being the most authoritative overview of the work of Louw, this book presents a new viewpoint on a familiar and much written about era in art from a new perspective.

The author, Joy Sleeman is Professor of Art History and Theory at the Slade School of Art in London. She is a former Henry Moore Fellow and Curator of the Arts Council Collection UK touring exhibition in 2013-14, Uncommon Ground: Land Art in Britain 1966-1979.