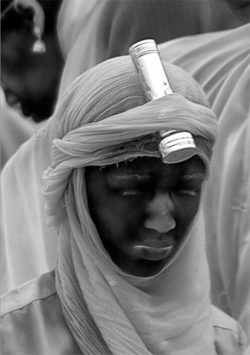 In collaboration with composer Ben Frost and cinematographer Trevor Tweeten, Mosse has been working with a new super-telephoto military camera that can see beyond 50km and accurately identify an individual from 6.3km, to create an artwork about the refugee crisis unfolding across the Middle East, North Africa and Europe.

Narratives of the journeys made by refugees and migrants across the Aegean Sea, off the coast of Libya, in Syria, the Sahara, the Persian Gulf, Calais and Greece are captured by this extremely powerful thermal camera which translates the world into a heat signature of apparent temperature difference reading any biological trace of human life.

At a time when, according to the UN, the world is experiencing the largest migration of people since World War II, with more than a million people fleeing to Europe by sea in 2015 – escaping war, climate change, persecution and poverty – Mosse’s film presents a portrait of migrants made with a camera that sees as a missile sees.

This publication features installation views and images of past works, an interview with the artist by curator Alona Pardo and a text by Anthony Downey. Published to accompany the exhibition, Richard Mosse: Incoming at Barbican, London, 15 February – 23 April 2017.