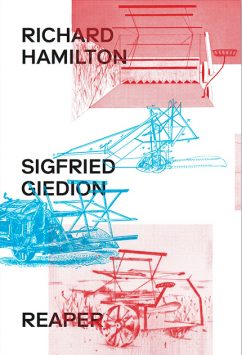 The starting point of this publication — and its eponymous exhibition held in Zurich in Spring 2017 — is the conceptual encounter between British Pop art artist, Richard Hamilton (1922–2011) and Swiss historian and critic of architecture Sigfried Giedion (1888–1968), famous for his landmark book, Space, Time, and Architecture which is an influential history of modern architecture published in 1941.

In 1949 Richard Hamilton — then a member of the London-based Independent Group — realized the, Reaper print series as a reaction to Giedion’s 1948 book, Mechanization Takes Command in which he describes the mechanization of everyday life.

Reproducing Hamilton’s complete Reaper series juxtaposed with selected examples of illustrations created by Giedion alongside many related illustrations, this publication brings together seven essays by renowned international scholars, all of whom question the relationships between visual arts, technology, science, and architecture.

Among the many topics discussed are Hamilton’s early works and exhibition installation practice, post-war British biotechnology and architecture, Hippie Modernism, and the visual strategy of Giedion’s books.