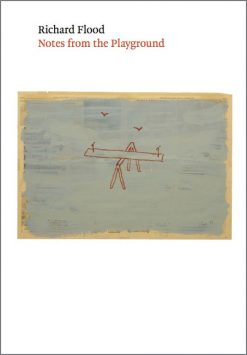 Notes from the Playground is a carefully selected anthology of 30 essays by the curator, academic and writer, Richard Flood. This new collection of his written work from over the past 40 years reveals an original and rigorous connection to the world of ideas and beauty and the critical and aesthetic experience of our present times.

Drawing from his broad knowledge of history, cinema, literature, poetry, design and architecture, Flood’s writings combine the autobiographical with the theoretical, presenting an intimate understanding of renowned contemporary artists.

Throughout many of the essays, he draws on personal correspondence between himself and the artist, including an annotated conversation with Paul Thek discussing his fabricated works of wax ‘raw meat’ facsimiles embedded in luxurious Plexiglas cases; four interviews with Robert Gober during the 1990s, offering vivid accounts of his sculptural and creative process; and a detailed description of a portrait sitting at Michael Landy‘s studio.

Flood’s significant essay on Arte Povera, co-authored with Frances Morris, is also reproduced, providing evidence of his ability to write in multiple ways. These essays interweave the anecdotal with the art historical to bring about new perspectives on the work and contexts of these important artists.

Richard Flood is Curator at Large at the New Museum (New York), where he has also served as Chief Curator. Prior to his 2005 appointment, Flood was Chief Curator of the Walker Art Center, Minneapolis, where he organized a wide range of exhibitions, including Brilliant!: New Art from London, and Zero to Infinity: Arte Povera 1962-1972 (a joint project with Tate Modern, London). Flood has also been Curator of P.S.1, New York, and Managing Editor of Artforum magazine.