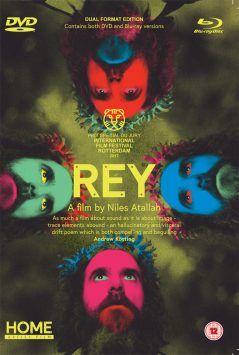 Once upon a time, a man travelled to the end of the world. There, at the tip of recently independent South America, he founded his kingdom. It was 1860 and this French adventurer, Orélie-Antoine de Tounens, was perhaps a little crazy.

Armed with a constitution penned by himself and a new flag, he fought his way through the rugged wilderness on horseback. After arriving he managed to unite the natives and was chosen to become their ruler. At least, that’s one version of this true story.

Or, he was helped by a native traitor. He was a French spy! He succeeded, but was captured. Banished. Died. But returned? Who remembers the what and where of it? In Rey, the problems of history and memory are emphasised by the degradation of image and sound.

Chilean/American director, Niles Atallah shot some segments in 2011, then buried the 35mm, 16mm and Super-8 film in his back garden. What does time do to a story? The results of these burials recur throughout the film – as deteriorating memories and the king’s wild visions. With the support of the Hubert Bals Fund, Atallah also experimented with puppets, masks and stop-motion animation. Everything culminated in this astonishing, delicate work of art: an ode to film and a fascinating fairytale.

“Rey is a weird and sometimes wonderful film, featuring moments of piercing, memorable strangeness.” – The Guardian

“The little-known story of a French adventurer claiming to be king of Patagonia is told via a bold combination of formats brought together in this enjoyable avant-garde feature.” – Variety