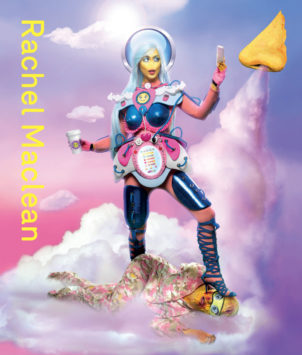 ‘Ms. Maclean has a sharp ear for the depleted emotional repertoire and the languages of empowerment and self-realization that salt online discourse. Her cast of grotesques runs from melting zombies to rats in Disney Princess dresses.’ — New York Times

With contributions by Rachel Maclean, William Davies (author of The Happiness Industry: how the government and big business sold us well-being), Melissa Gronlund (writer and co-editor of Afterall Journal), and exhibition curators Bren O’Callaghan and Sarah Perks.

An extract of the HOME commission was released at Frieze Art Fair, London (October 2016).

Maclean is a hand-picked focus artist for Frieze Film in 2016. In collaboration with Channel 4, extracts of the artist’s new commission was televised on Random Acts in November 2016.

Rachel Maclean represented Scotland with her solo Pavilion exhibition at Venice Biennale in 2017.