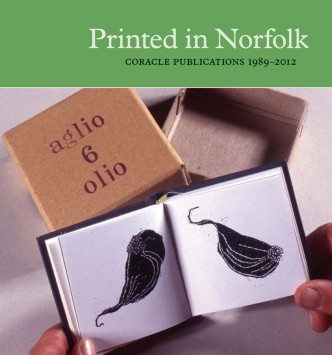 For more than 35 years, Coracle has produced artists’ books, critical works, editions and ephemera. Printed in Norfolk tells the story of this key contemporary small press in all its manifestations as printer, publisher, bookshop and gallery.

The emphasis here is on the years 1989 – 2012, when, under the direction of Simon Cutts and Erica Van Horn, a symbiotic working relationship between in-house production, the commercial practices of Norfolk printers Crome and Akers, and Norfolk binder Stuart Settle, signalled a new standard for the small press.

‘The activities of Coracle have been important for over 30 years because it has encouraged the book—both in terms of manufacture and reception (printing and stitching as much as turning a page and reading)—to be understood to issue forth and stand as a tangible space, a platform, for critical activity.’ (Andrew Wilson, Curator of Modern & Contemporary British Art, Tate Britain)