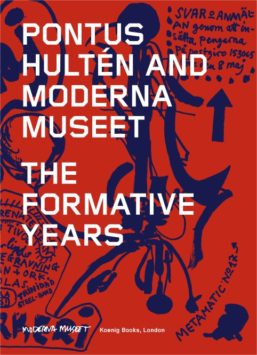 Iconic curator, Pontus Hultén worked at Moderna Museet in Stockholm between 1958 and 1973. In 1960 he was appointed director. It was in this role that he built the collection and the Museum’s international reputation, with pioneering exhibitions such as Movement in Art (1961), American Pop Art: 106 Forms of Love and Despair (1964), She – A Cathedral (1966), and Andy Warhol (1968).

In 2005 Hultén donated his private art collection, his library, and his archives to Moderna Museet. The Formative Years, is to focus on his practice as an exhibition curator and museum director and to explore the legacy of the legendary 1960s and its implications for the Museum today.

In addition to the five articles the book contains archival photographs and documents as well as a previously unpublished text from 1962 by Hultén himself, outlining his ideas on how a modern art museum should be run.