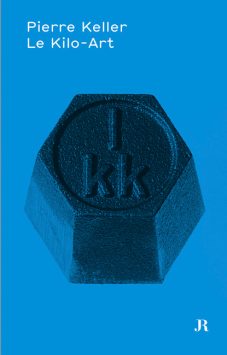 French edition (text in French only).

This publication revives the fascinating adventure of Pierre Keller’s invention and dissemination of the Kilo-Art (the ‘Swiss standard for art measurement’).

For the two years 1972 and 1973, the young artist—now a key figure of the contemporary artistic and pedagogical scene in Switzerland—dedicated his life to what he called ‘conceptual art with realization’.

From its first production tests to its exhibition in Geneva, Lausanne, and Venice, through the voluminous correspondence needed for its ratification by the Swiss Federal Office for Weighs and Standards, this book follows every step of the birth of the Kilo-Art.

To be interested today in the Kilo-Art is to understand how a young Swiss artist, informed by the lessons of Marcel Duchamp and American Conceptual art, could, at the beginning of the 1970s, propose an artwork more subversive that it may initially appear, in which avant-garde art meets the normative administrative system.

Introduced by Clement Diriee, the volume brings together texts by Tommaso Trini and Martine Lanini written in the 1970s, as well as many documents and never-before-published photographs recreating the adventure and atmosphere of a project typical of its time.

Published in the Hapax Series.