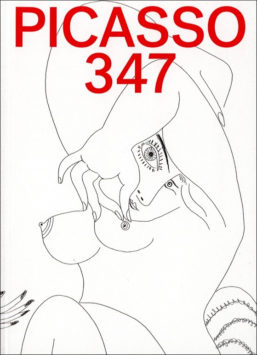 It includes Tone Skedsmo’s original essay from 1981 as well as an introduction by the curator of the exhibition, Karin Hellandsjø.

“The series takes its name from the prodigious output of 347 prints completed between 16 March and 5 October 1968. They were made in collaboration with the master printers Aldo and Piero Crommelynck at their studio at Mougins, in the South of France. A set was exhibited in October 1968 at the Art Institute of Chicago and at the Galerie Louise Leiris in Paris two months later […]

Printmaking played an important role in Picasso’s art after 1963. He combined existing techniques and invented new ones in a fertile collaboration with the Crommelyncks, with whom he also made the 156 series of 1968-72 […]

The 347 series is remarkable for its extent and for the rate of production, which averaged two prints per day. They are complex works that explore a number of Picasso’s related themes, such as circuses, bullfights and the theatre, in a humorous and bawdy manner.” — TATE collection description online