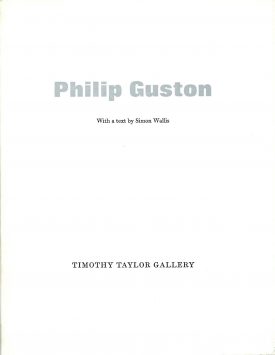 This catalogue presents an unusual selection of Philip Guston’s paintings and works on paper dating from the early 1950’s through to the late 1970’s which present an insight into the mechanics of his mind and method, clearly charting his development of a new way of seeing from abstraction through to a ground-breaking artistic inventory of forms.

Focusing on the object in Guston’s work, this exhibition shows the emergence of form in his drawings and paintings of the 50’s and 60’s, culminating with the invention of an alphabet of crude, tragic-comic images from life that become so distinct in the 70’s.

Leaving (1950), a quill and ink drawing on paper, is a delicate abstract work, but up close the drawing reveals early signs of an intuitive handling of form. Sleeper III (1960) is at first glance abstract, however upon closer inspection the figure of a man gradually emerges, almost adopting the classical pose of Rodin’s, The Thinker.

We see forms over-painted by the artist with lively brush strokes as he pushes the boundaries of figurative painting, seeing familiar objects with fresh eyes. Arriving at, Story (1978) we are presented with a barren, Beckett-like landscape, populated by a clear selection of cartoon-like objects: a hand holding a cigarette, an Egyptian-style eye, a book, a light-bulb, a rope and a canvas. It becomes the culmination of Guston’s surreal inventory of recurring motifs.

Guston’s creation of an existential pictorial alphabet from the simple everyday object, and his brave, ground-breaking dialogue between abstraction and figuration has influenced a whole generation of later artists from Francesco Clemente to Jean Michel Basquiat, and Georg Baselitz to Fiona Rae.