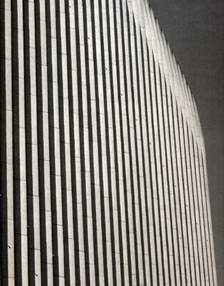 This catalogue accompanies Perry Roberts’ first solo exhibition in the UK since his departure from this country to take up residence in Belgium in the mid-1990s. It consists entirely of new work, commissioned by Ikon, made in response to architecture in Birmingham, characteristically encouraging us to look again at things we think we know.

Since his emergence as an artist, from Goldsmiths College, London in the late 1980s, Roberts has remained remarkably true to an aesthetic proposition that arises out of the problematic ideals of modernism. On this occasion Roberts has made a number of video pieces focused on the exterior walls of large buildings, dating from the 1960s and 70s, identifiable in the agglomeration of Birmingham’s city centre: a hotel, a library, a signal box and so on. The formal qualities, the configurations of lines and shapes on these skins stretched over supporting internal structures are eloquent, very telling through their modernist references. The grids, the pre-fab repetitions, the “abstract” vernaculars – these all suggest a kind of certainty supposed to come with science and mathematics. Furthermore, they share a visual vocabulary that is the inspiration for the style Roberts adopts, the style that he takes and reinserts into a loose-knit, global conversation about art and the way it fits into everyday life.