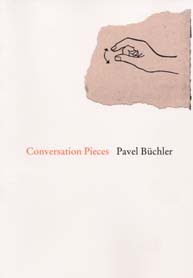 The starting point for Conversation Pieces was Pavel Büchler’s exhibition in Tampere, Finland, the result of a summer residency.

However, rather than producing a catalogue, Büchler invited other artists about whose work he had previously written to write about whatever they chose, to make a publication in spirit of conversation or exchange.

The resulting diverse and anecdotal collection of essays touches on many subjects, including Nikita Kruschev’s visit to Tampere in the late 1950s, the significance of angels, cosmonauts’ use of the pencil, and a detailed Lacanian analysis of a work by Pavel Büchler.