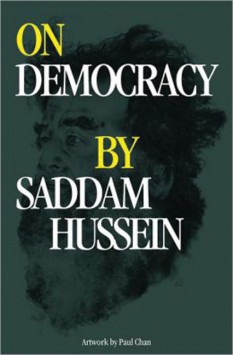 In 2003, after returning from a month long stay in Baghdad, American artist Paul Chan was given a gift from a colleague in the human-rights group Voices of the Wilderness, a copy of three speeches on democracy written by Saddam Hussein in the 1970s, before he became president of Iraq.

The speeches, compiled here for the first time in English, are politically perverse, yet eerily familiar. The then vice president of Iraq characterizes social democracy as demanding authority, and defines free will as the patriotic duty to uphold the good of the state.

This volume takes the speeches as an opportunity to ask what democracy means from the standpoint of a notorious political figure who was anything but democratic, and to reflect on how promises of freedom and security can mask the reality of repressive regimes.

With drawings by Paul Chan, including a new suite in its entirety, and essays by Bidoun’s Negar Azimi, philosopher and artist Nickolas Calabrese and journalist Jeff Severns Guntzel, this book is the inaugural co-publication of the Deste Foundation for Contemporary Art and Chan’s own Badlands Unlimited.