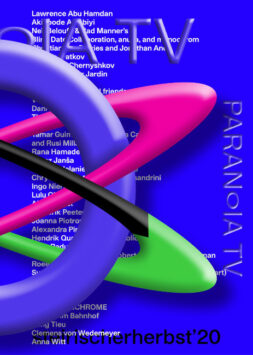 Overnight somewhere in April 2020, the 54th edition of the steirischer herbst festival in Graz, Austria, turned into a semi-fictitious media company, a broadcaster called Paranoia TV.

Newly commissioned works by 52 artists and collectives included feature films, binge-worthy serial formats, and online discussions galore. Assuming the role of a broadcaster did not just involve moving to the virtual, however.

Presence, as well as absence, are always inscribed in media; television is both a celebration of reality as well as that reality’s complete absence. It is perhaps the next platform contemporary art can fully critically embrace.