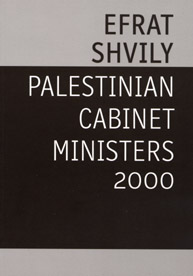 In May 2000, Israeli photographer Efrat Shvily first went to Ramallah in the West Bank to start taking pictures of the Palestinian cabinet ministers, which at that time represented the Palestinian Authority. The leaders were preparing for the summit meeting at Camp David in the U.S. Efrat Shvily wanted to help ‘establish’ a new Palestinian state with dignified portraits of its ministers-to-be.

In September 2000 riots started in Ramallah: the Second Intifada had begun. Shvily has not returned since. With six portraits missing, the project is incomplete. She wants it to remain so, in order to indicate that this short period in history, when peace was on the horizon, has come to an end.