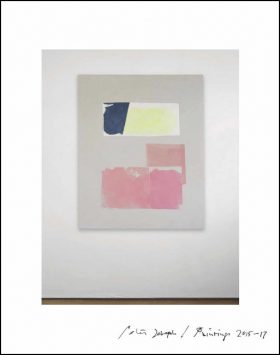 Known for his two-colour, tonal canvases of precise, carefully considered hues, British artist Peter Joseph’s work historically exists within self-imposed, specific structures and parameters – the effect being one of unlimited freedom confined within the ‘safety’ of a framed construct.

While comparable to the work of Mark Rothko and Barnet Newman, Joseph’s is an anomalous strain of Minimalism: his allegiance lies as much with Renaissance masters as with his contemporaries.

More recently his format has departed from his established ‘architecture’ to divide the canvas into two planes, horizontally or vertically, wherein loose brushwork, natural tones and patches of exposed canvas tap into new feeling.

As Joseph says: ‘A painting must generate feeling otherwise it is dead… The aspiration is to find that moment when feeling is not just emotional expression, but is transformed into a value.’