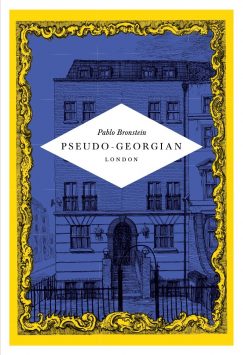 Following of from his best selling, Postmodern Architecture in London (2007), Bronstein turns his focus to the subsequent style which has dominated London – the pseudo-Georgian.

This architecture, often despised, and always ignored, has been by put to use by developers for the last 30 years. The architecture is defined by its economy, which it combines with historic quotations – to interesting effect.

Bronstein has produced 50 new drawings documenting the best examples of these buildings in London, and has written what is probably the first published critical and historical account of this complex and successful vernacular style.

This pocket book is published to coincide with the exhibition, Pablo Bronstein: Conservatism, or The Long Reign of Pseudo-Georgian Architecture at the Architecture Gallery, RIBA, London, 21 September 2017 – 11 February 2018.