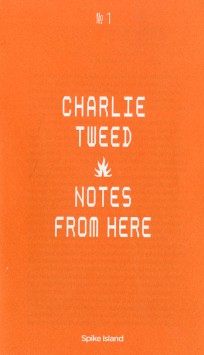 While masquerading as a fiction, the world of Charlie Tweed’s exhibition, Notes Part I, II & III like all dystopias, mirrors the concerns of the present moment – specifically twenty-first century systems of control that perpetuate ideologies of fear. Comprised of seven videos divided into three chapters, each episode seems to be a transmission from a shadowy, omnipresent powerbase that is orchestrating change on a mass scale.

The pamphlet Notes From Here is a fictitious manifesto, apparently scripted by the anonymous collective whose computerised voices narrate each video episode, but also includes fragments from real world manifesto The Coming Insurrection by The Invisible Committee, and an afterword by Spike Island curator Marie-Anne McQuay.

Published alongside an exhibition at Spike Island, Bristol, 9 October – 6 December 2010.