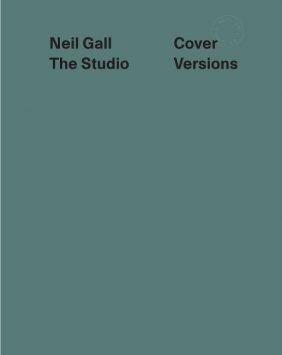 Neil Gall’s new publication is an archive of 147 collaged covers reproduced one to one. Bound as an assembly of manilla board together with two typewritten texts presented as a foolscap folio written by Ruth Lough and Jon Wood.

The artist, Neil Gall (b.1967, Aberdeen) has always placed collage, in its broadest sense, at the heart of his artistic practice. The collages that comprise The Studio series are a distinct body of work made from the covers of the influential art magazine of the same name, published in London from 1893 to 1964. They incorporate bold, sometimes jarring colour combinations that, although formal in concern, touch on many of the themes that were part of The Studio‘s unique sensibility and content.

Far from didactic, Gall’s collages, combining cut and paste techniques with drawing and painting, expand on the vast repertoire of rich imagery for which the publication was renowned. Themes emerge that suggest an oblique form of social commentary – a look at how Britain viewed itself as a continuing cultural force, despite shifting political and social landscapes.

Rather than exercises in nostalgia, Gall’s contemporary collage works use techniques developed by Dada and Surrealism to nudge editorial didacticism in an open and playful manner.