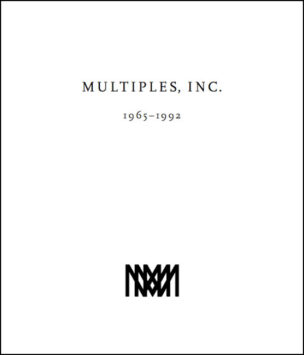 Multiples, Inc. was an art publishing company founded in 1965 by a group of five partners, including Marian Goodman.

During its existence, Multiples, Inc. published seminal editions with some of the most important artists of the 20th century over a period of almost three decades between 1966 and 1992.

The 1960s were the high times of multiples – artworks were not conceived as single objects but as objects to be published in several examples, often using new materials and contemporary manufacturing techniques.

Producing artworks in editions allowed a democracy of distribution, permitting them to be offered at lower prices, in turn making current developments in the art world available to a larger audience.

While many publishers emerged in the U.S. and in Europe in the 1960s, not all of these organisations remained active into the future, whereas Multiples, Inc. survived the initial impetus of the new medium and went on to increasingly produce prints in the 1970s and 1980s.

Including works in a broad variety of media ranging from objects, works on Plexiglas, jewellery, and furniture pieces, to an extensive selection of prints, portfolios, artist books, a historically complete list of all the Multiples, Inc. editions, as well as many documents illustrating its wide-spanned history.

£48.00
Buy now
(Your order will be fulfilled by Ingram Publisher Services)