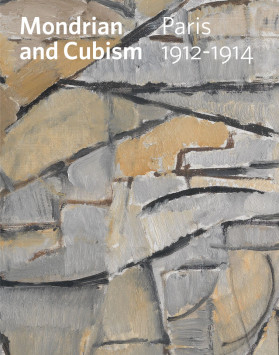 Drawn to the cubist work of Georges Braque and Pablo Picasso, Mondrian (1872–1944) spent two years in Paris, from 1912–14, that lead him to begin experimenting with an entirely original abstract style.

Using a cubist palette of grey and ochre, the artist transformed the landscapes and architectural facades of his earlier figurative works into compositional structures of increasing complexity and abstraction. Upon his return to The Netherlands in 1914, Mondrian exhibited 15 works he had painted during those two significant years in France.

This catalogue maps Cubism’s influence on artists working in The Netherlands at that time, and demonstrates Mondrian’s central role in bridging the gap between the French cubists and their Dutch contemporaries.

Accompanying over 300 illustrations – including close details of key works – a chronology by Hans Janssen tracks Mondrian’s development through the artist’s own words.

Originally published in Dutch to accompany the exhibition at Gemeentemuseum Den Haag, The Hague in 2014, this important survey is now available in English for the first time.

£22.95
Buy now
(Your order will be fulfilled by Ingram Publisher Services)