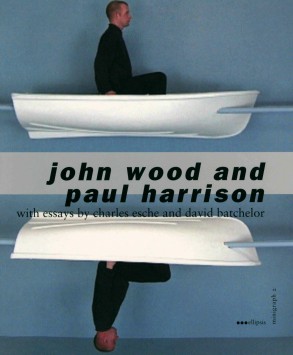 Since they began collaborating in 1993, John Wood and Paul Harrison have accumulated a series of playful and beguiling video works which are distinguished as much by their droll humour as their unerring economy of execution. Played out against a minimalist, monochrome backdrop, or within the sealed-off space of the monitor itself, each of the works involves the presence of one or other of the artists, either as the butt of an extended sight-gag or as the trigger for a spiralling, visually surprising conceit.

Minigraphs is a series of publications developed by Film and Video Umbrella devoted to contemporary artists working with film and video. Fully illustrated, and with specially commissioned essays and an extensive lists of works, this series provides an attractive and indispensable introduction to some of Britain’s most exciting contemporary artists.