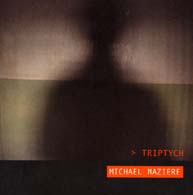 During the summer of 2001, Michael Mazière spent a period of time at Prema Arts Centre in Gloucestershire working on Delirium, the last piece in the Triptych, which began in 1996 with Remember Me, followed by Blackout in 2000.

Maziere studied film at the Royal College of Art in the early 1980s, taught by Peter Gidal, author of ‘Materialist Film’ and guru of a structuralist filmmaking.

Yet, although modernist theory is a strong influence in the film’s material, its constructions and language, is now tempered with other elements resulting in a much more expansive consideration.

£4.00
Buy now
(Your order will be fulfilled by Ingram Publisher Services)