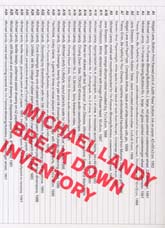 This book represents the complete record of all Michael Landy’s possessions – all 7088 items. They were broken down into their component parts during Break Down, performed at the former C&A flagship shop on Oxford Street, London W1. Break Down took place between Saturday February 10 and Saturday February 24, 2001 and the remains were buried in a landfill site. The project was a The Times/Artangel commission.

The inventory was drawn up by Michael Landy with the assistance of Clive Lissaman.