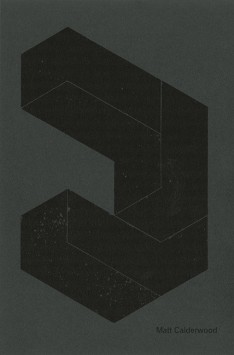 Based on two solo exhibitions by Matt Calderwood at BALTIC 39 and De La Warr Pavilion over the period of one year, this catalogue documents the new works and features a text by Chris Fite-Wassilak, providing the first in-depth analysis into the artist’s process-based practice.

Calderwood is known for his often perilous performances, sculpture and film works. Friction, counterbalance and leverage between disparate materials are carefully orchestrated to avoid systems collapsing.

In new works made out of materials with contrasting qualities such as welded steel and paper, he continues investigating relationships between physical properties and their transformation over time.

Published retrospectively after the exhibitions Paper Over the Cracks, at Project Space, BALTIC 39, Newcastle upon Tyne, 15 March – 23 June 2013, and Exposure at De La Warr Pavilion, Bexhill on Sea, 9 November 2013 – 23 February 2014.