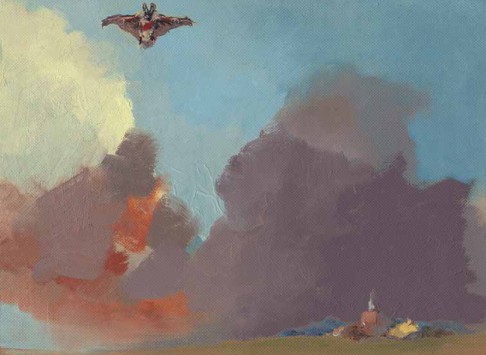 Marvin Gaye Chetwynd is known for her anarchic performances that draw widely from both high and low cultural sources, such as Giotto and Star Wars. Often amassing groups of participants, her mixed-media events feature elaborate homemade costumes and props.

In the spring of 2014, Sadie Coles gallery in London plays host to a show of Chetwynd’s recent series of ‘bat paintings’ created in Tuscany whilst on a residency. These uncanny images feature rustic Italian landscapes swarming with bats.

In 2004 Chetwynd was selected to participate in New Contemporaries 2004 at Coach Shed, Liverpool Biennial and Barbican Art Gallery, London. She was nominated for the Turner Prize in 2012.

This artist’s book (with no text) was published on the occasion of the exhibition at Sadie Coles H.Q. London, 11 March – 26 April 2014.