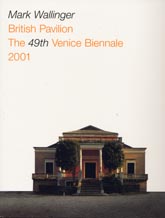 Turner Prize winner, Mark Wallinger was selected by the British Council to represent Britain at the 49th Venice Biennale in 2001 (10 June – 4 November). His exhibition in the British Pavilion consisted of then recent and new work in a variety of media, including work created specifically for the Biennale.

Born in 1959 and based in London, Wallinger has established an international reputation over the past 25 years. His practice encompasses a wide range of media including painting, photography, sculpture, video and installation, even a living racehorse. One of his most notable public commissions was the widely acclaimed Ecce Homo sited in London’s Trafalgar Square in 2000.

Consistently surprising and ambitious, his work has taken as its subject matter art history, mythology, religion, class structure, sport and popular culture. His approach has, however, remained characteristically provocative and often witty, and a recurrent questioning of traditional values and belief systems runs through the work.

This beautifully produced publication, including text by Ralph Rugoff, Director of Hayward Gallery, London (and former Director of CCAC Institute, San Francisco), was published to accompany the British Pavilion exhibition.

Wallinger was awarded a Henry Moore Fellowship at the British School in Rome in 1998 and a DAAD Award, Berlin, in 2001. A comprehensive solo exhibition of Wallinger’s work was held at Tate Liverpool in Autumn 2000.

£15.95
Buy now
(Your order will be fulfilled by NBN International)