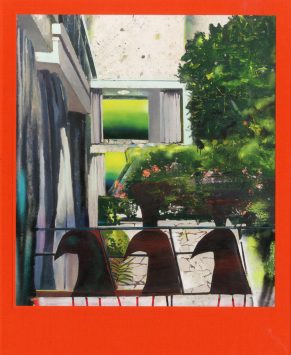 To coincide with the opening Time Can Space, Blain|Southern has published a new book that surveys four years of Romanian painter Marius Bercea’s career. This is the first exhibition of Bercea’s work at the Berlin gallery.

Within his interior and landscape paintings, largely influenced by the architecture and nature of California, Bercea portrays a sensorial reality through a hybrid of both real and imagined hidden places.

With a behind-the-scenes perspective, he paints from the position of a curtain twitching resident. Seemingly private moments are caught through a window or across a back garden, from a view point that wouldn’t be out of place in a Hitchcock film.

But this is voyeurism two steps removed. Painting every work from his studio back in Cluj, Bercea plays with the distance between California and Transylvania, and the blurring effect of memory recall. By doing so he projects a liminal state between two realities and mindsets.

He uses swimming pools as a recurring motif but rather than being clichéd icons of a Californian dream they are a representation of several states: below, between and above the water.

This beautiful catalogue features texts by Andrew Beradini and Heinz-Norbert Jocks, alongside colour plates of paintings from 2014-18.

Published on the occasion of the exhibition, Time Can Space at Blain|Southern Berlin (3 March – 14 April 2018).