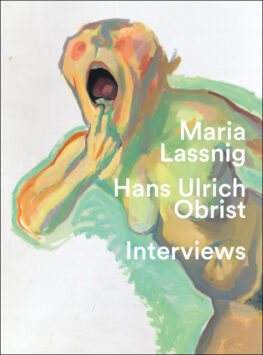 Maria Lassnig (1919-2014) and Hans Ulrich Obrist were friends since the 1990s. Whenever the curator travelled to Vienna, where the artist lived, he would visit her in her studio and be served apple strudel.

While they conversed about current projects, art and stages in her life and development, he was allowed to have a tape recorder and a camera running.

Made between 1999 and 2012, these recordings are now being published for the first time in the form of a book.

They are accompanied by an audience discussion together with Robert Fleck that was held at the Musée des Beaux-Arts in Nantes at the beginning of the exhibition ‘Maria Lassnig’ in 1999 and by the transcript of an interview filmed by Jacqueline Kaess-Farquet at Maria Lassnig’s solo show at the Serpentine Gallery in 2008.