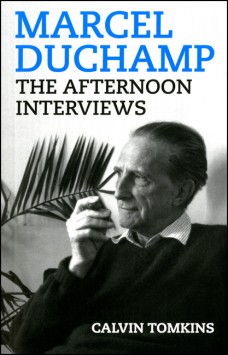 In 1964, Calvin Tomkins spent a number of afternoons interviewing Marcel Duchamp in his apartment on West 10th Street in New York City. Casual yet insightful, Duchamp mused on everything from paying taxes to his feelings about art dealers to his influence on younger generations of artists like Robert Rauschenberg and John Cage.

Those interviews became the source material for Tomkins’ profile of the iconic artist in The New Yorker, and later in his definitive 1996 biography, Duchamp. But they have never been edited and made public, until now.

In striking contrast to the mythic image established by decades of Duchampian scholarship, The Afternoon Interviews reveals him to be a man and an artist whose playful principles toward living freed him to make art that was as unpredictable, complex, and surprising as life itself.

This book includes never before published portraits of Duchamp recently discovered in the Philadelphia Museum of Art archive and an introductory interview with Tomkins reflecting on Duchamp as an artist, guide and friend.

£14.50
Buy now
(Your order will be fulfilled by NBN International)