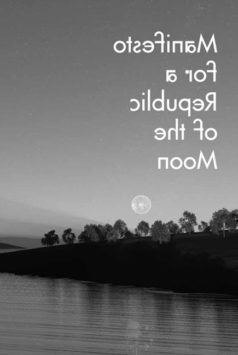 Manifest for the Republic of the Moon is a mixture of scientific images, poems, rants and other expressions that could make up a picture of how it would be, a half-century or more on from the Moon landings, to occupy the Moon.

This pocket-book contains an introductory essay and is edited by curator, Rob La Frenais with contributions from the exhibiting artists, along with Dr. Ian Crawford (Professor of Planetary Science and Astrobiology, Birkbeck College), and extracts from the visionary Whole Earth Catalog magazine (1968-72).

Republic of the Moon was a touring exhibition, commissioned by Arts Catalyst with FACT. The first version of the exhibition was presented at FACT, Liverpool, in winter 2012. The second version was at Bargehouse, London, in 2014.