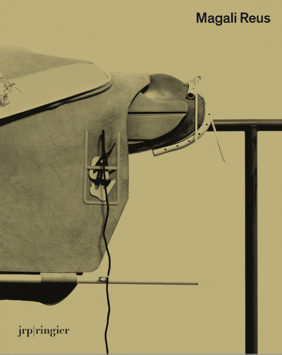 London-based artist, Magali Reus is one of the most acclaimed new voices in contemporary sculpture. This publication is the first monograph dedicated to her work.

Renowned for her interest in the relationship between mass-produced articles and the human body in the context of today’s digital society, Reus draws on a vast range of formal influences and references, from the domestic to the industrial, the functional to decorative, creating pieces that evolve as an accumulation and layering of sculptural details.

Taking everyday objects as starting points, her work operates on a visual register as a formal configuration, but also as a choreography of emotional and physical experience. For her, objects like fridges, padlocks, and seating, are not seen only as facilitators of our everyday actions, but also as physical receptacles for our bodies.

She is thus interested in positioning them not only as shells or providers, but as objects imbued with their own sense of personality. Re-contextualised, these things become uncanny and perplexing, acquiring a very different life, which is almost theatrical.

Magali Reus’ recent exhibitions include: The Hepworth Wakefield, UK, and SculptureCenter, New York, USA. In 2015, she won the Prix de Rome, the longest-standing prize for artists in the Netherlands.

Published with the Stedelijk Museum Amsterdam on the occasion of the exhibition Magali Reus: Mustard (10 September – 27 November 2016), and partnership with The Approach, London.