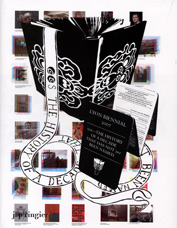 This publication is concerned with play, mapping, and the experience of a collective writing. Thought of as a history, geography, and contemporary art book, it is the result of a series of delegations, invitations, and programs of those who conceived the Biennale event.

Bringing together 70 ‘players’ from around the world, divided into two groups according to whether they are artists or critics and exhibition curators, the project was developed around a central question: How to define the current decade? The publication is accompanied by previously unpublished essays by and interviews with Mehdi Belhaj-Kacem, François Cusset, Paul Veyne and Ralph Rugoff among others.