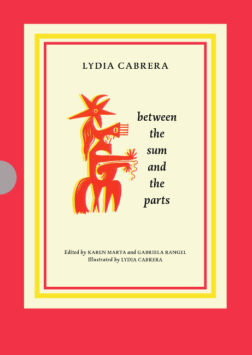 Ever a trickster, the anthropologist, writer and activist Lydia Cabrera (1899–1991) blurred the lines between historian and storyteller, reality and fiction.

Finding their initial context—and audience—in the avant-garde milieu of interwar Paris, Cabrera’s stories based on Afro-Cuban myths and folktales continue to inform and inspire generations of artists, writers, and scholars.

When the rise of fascism forced Cabrera to return to her native Cuba, she devoted herself to the preservation of Afro-Cuban cultures, a lifework that culminated in her scholarly and spiritual masterpiece, El Monte, in which the Cuban wilderness is brilliantly animated by the voices and rituals of the dead.

The first English volume dedicated to her work, Lydia Cabrera: Between the Sum and the Parts introduces her substantial legacy to a new audience. Includes a facsimile of the illuminated manuscript, Arere Marekén (1933), a collaboration between Lydia Cabrera and Alexandra Exter.

‘Because cultural homogenization is nothing less than cultural extinction, Lydia Cabrera’s work models a strategy for survival in our own period, in which the spectre of extinction has become ever more present. Cabrera dedicated herself fully to her work in historically difficult circumstances and in involuntary exile, so it is disconcerting that her work remains ignored. Her legacy deserves revisiting.’ — Hans Ulrich Obrist