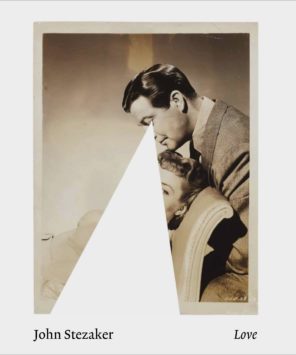 This beautiful catalogue showcases works by John Stezaker brought together in the exhibition John Stezaker: Love (held at The Approach, London, in 2018) made by the artist between 1976 and 2017.

They share and exemplify Stezaker’s iconic interruptions of, and interventions into, found images dating mostly from the mid-twentieth century and as such products of modernist culture: the image flow of electrical-mechanical mass and popular culture, notably film stills, press and publicity photographs, magazines and postcards.

Heightened romance pervades Stezaker’s imagery, whether in the idealisation of scenery on a picture postcard, or created by the highly skilled lighting, posing and preparation of a star for a publicity shot, or the minute and all-encompassing technical precision required to shoot a scene of a feature film.

Stezaker selects images that are the products of industrially created romantic fantasies. Their purpose was to enchant the viewer-consumer, proposing a beautified, more transcendent or exciting reality, free of dreary routine, shabbiness and petty frustrations.

As demonstrated most dramatically by his series called Love (2016), Stezaker’s work seduces and ensnares the viewer’s gaze, arresting their perceptual expectations, accessing and questioning their empathetic sense and triggering lateral associations into memory, desire and unease.

This catalogue features essays by Michael Bracewell and Craig Burnett.