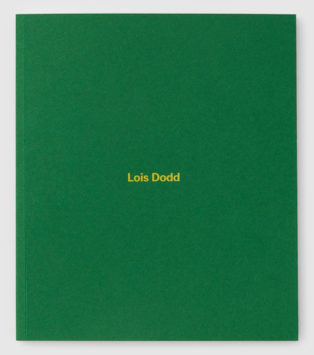 Published on the occasion of the American artist’s first survey exhibition outside the United States. It includes works encompassing the breadth of Dodd’s output and covering key motifs including landscapes, isolated architectural elements, nocturnal scenes and burning houses.

Lois Dodd (b. 1927) has spent more than 70 years attentively observing the natural and man-made architectures of her surroundings and recording them in paint. Her works preserve the beauty camouflaged in ordinary and occasionally enigmatic details such as windows, wood siding, greenery and washing lines. She is influenced by principles of observed natural light and repeated looking that characterise the work of artists such as Edward Hopper and Paul Cézanne.

Dodd’s works from the 1950s demonstrate an explorative period with a visual language of largely amorphous shapes tending towards pure abstraction. In a longstanding series of windows for which she has garnered much attention, Dodd’s works range from Hitchcockian voyeurism to meditations on opacity and the curiosity in dilapidation.

The artist attended Cooper Union in New York from 1945 to 1948, where she studied textile design. She co-founded the small, yet influential co-operative Tanager Gallery (operating 1952–1962) which exhibited the work of artists such as Alex Katz, Willem de Kooning, Philip Guston and Helen Frankenthaler.