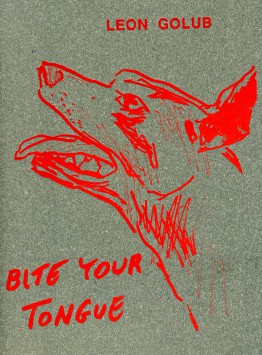 This survey catalogue of the American figurative painter, his first in London since 2000, highlights key aspects of the artist’s oeuvre from the 1950s until his death in 2004.

Golub’s paintings from the 1950s depict universal images of man and reference the classical figure found in antiquity, while his highly political series of the 1970s and 1980s draws on the Vietnam War, American foreign policy and the rise of paramilitary soldiers in places such as South Africa and Latin America.

His work from the 1990s incorporates slogans, text, graffiti and symbols into dystopian scenes of urban existence.

Throughout his career Golub was guided by his belief that art should have relevance. His works are profoundly psychological and emotive – often painted on a huge scale – and return again and again to themes of oppression, violence and the misuse of power.

Published on the occasion of the exhibition Leon Golub: Bite Your Tongue at Serpentine Gallery, London, 4 March – 17 May 2015.