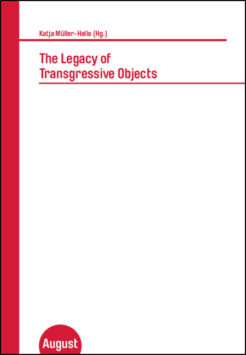 Rebellion, transgression, and scandals are the normal conditions of ‘68. According to recent historiography, however, the revolutionary promise of the student revolts was short-lived.

The process of stabilization and the decline of political energies in the 1980s followed the utopian phase of 1968/69. Yet one promise of the politicized era appeared to persist through this history of decline – the idea of transgression.

Across a number of essays, this book traces the afterlife and historization of the theorem of transgression in art, architecture, technology, music, and psychedelic practices of the 60s and 70s by looking at the objects, materials, and images that actually shaped the idea of transgression.

The essays address for example, conceptions of radical architecture suggesting a whole new organization of society, the dissolution of boundaries between art and life in artistic practices, transgressions in music and festivals, and utopian visions of technological progress.

The very objects of such far-reaching ideas are often ephemeral and of deteriorating material quality when visited in archives and museums today – yet they still function as repositories of time and as evocative physical objects. Against this background the book traces the historical index of objects that promised to change the world and opened up future horizons of the recent past.