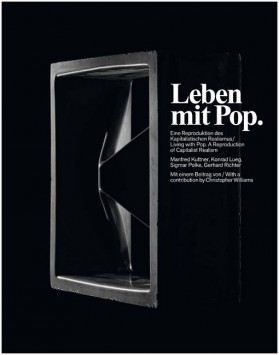 Gerhard Richter, Konrad Lueg, Sigmar Polke and Manfred Kuttner coined the term ‘Capitalist Realism’ on the occasion of their self-organised exhibitions in Düsseldorf in 1963.

Although they only used the term themselves for a short period and quickly distanced themselves from their perception as a group of artists, Capitalist Realism represented a specific conception of art in post-war West Germany that has remained controversial to this day.

This is the first exhibition publication dedicated to this important phenomenon. The main exhibitions and actions are documented in image and text and the international, art-historical and social context is illuminated from different perspectives.

Both the exhibition and this catalogue substantiate the topicality of one of the most intense and influential tendencies of the postwar period in Germany.

Published on the occasion of the exhibition Living with Pop: A Reproduction of Capitalist Realism at Kunsthalle Dusseldorf, 20 July – 29 September 2013.