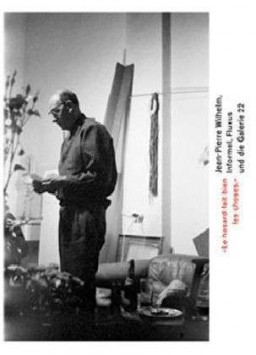 Jean-Pierre Wilhelm was one of the most interesting protagonists of post-1945 contemporary art. He opened the legendary Galerie 22 in Düsseldorf in 1957 with an exhibition of German art informel.

In the following three years the gallery became a contact point for the most important painters, musicians and authors of the day: Jean Fautrier, Robert Rauschenberg and Cy Twombly were to be seen there, John Cage, Hans G. Helms and Nam June Paik presented premieres of their compositions.

Hitherto unknown documents from the estate are published here for the first time, which show how Wilhelm’s idea of making the Galerie 22 into a ‘crystallisation point for a circle of people . . . who are interested in living art, into a space for daily encounter and free discussion‘ was enduringly realised.

From 1962 on, Wilhelm became one of the most important mentors of the international Fluxus movement initiated by George Maciunas: ‘Fluxus could not exist without Wilhelm.’ (Nam June Paik)