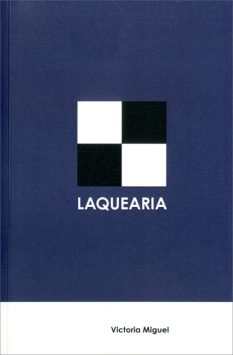 Laquearia is a lecture-demonstration – exploring the relationship between art, literature, music, and chess – in the tradition of the maverick American composer, John Cage (1912-1992).

During an imaginary meeting, Samuel Beckett and John Cage play the game of chess described in Beckett’s novel Murphy (1938). Each move is scrutinised by a clumsy narrator who asks: could the game from Murphy be used as the structure for a performance of Cage’s composition Reunion (1968)?

Reunion was originally performed by playing chess on a board created by Lowell Cross, which made audible live performances by Cross, Gordon Mumma, David Berhrman, and David Tudor, and distributed them to eight speakers surrounding the audience.

Asking and answering the narrator’s question, Laquearia was originally produced in tandem with a new digital version of Reunion, commissioned by the John Cage Trust and hosted at Johncage.org.

Produced in an edition of 500 copies to accompany the 2013 stage production at the Edinburgh Festival Fringe, this book includes an annotated version of the script and essays about the production and the recreation of Reunion.