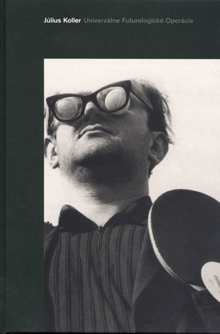 Július Koller was born in Piest’any in 1939, the year the second World War broke out. His work shows the primitivism, directness, non-artfulness and brutality present in a broad group of Slovakian art in the sixties. For Koller and his most significant contemporaries, a synthesis of this radical home experience and their own vision of the avant-garde art is typical.

The symbol of the question mark is present in his work from 1969 on. With a certain obstinacy, Koller repeats, varies and investigates it in the most different situations and correlations. Koller is also interested in ‘UFO-nauts’ and flying saucers. His identification with the most unreal in the series about ‘UFO-nauts’ takes place in a completely civil environment- on the balcony of his living quarters. Koller proceeds in a spiral from what is real to the most unreal and then back to the civil reality. English, German and Czech text